skip to main | skip to sidebar

We left the West McDonnell Ranges after three beautiful days there and headed off through Alice Springs for a quick food shop to the East McDonnell Ranges. Randall had heard about a place called Trephina Gorge, so we head straight there. It was only about 70ks from Alice Springs. We were surprised to have to drive along a single lane of bitumen, with wide gravel sides. When a car approached we both had to move over to the gravel.I later found out it is for the road trains, so they have all their wheels on the bitumen - we have to move aside for them! We also had to watch out for cattle as there are no fences here! When we arrived the camp area was quite full and we were lucky to get a spot! It was a lovely bush camping area, which both of us enjoy. We set up and Randall put up the satellite dish. 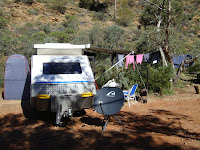 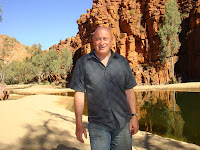 Lucky he did, because we started to watch Sky News, and saw the whole saga of the ousting of KRudd and the installation of Julia Gillard as PM! This was just the reason we got the satellite dish, so Randall was very impressed to get all the news first hand. We went along and told other people that we had a new PM and they were quite surprised.
The next day, after all the news conferences etc. we did a short 4WD treck into a place near ours called John Hayes Rockhole, which was very pretty. 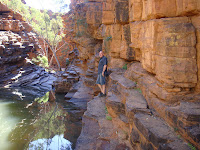 We also did a trip out to a place called Arltunga – a gold mining town in the middle of nowhere!! It was actually the first town in central Australia – before Alice Springs was created. We drove along the Binns Track, a gravel road. Randall thinks he’s a bit of a rally driver now he’s mastered 4WD, and we actually got airborne going over some unexpected bumps on the road!!! The town is very isolated, and it didn’t even have it’s own water supply! It amazes me that people were willing to come to these places – life would have been very harsh. 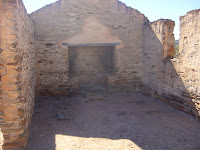 After a look at the ruins, we headed off to yet another gorge – N’Dhala Gorge. This was a 4WD only track, and we went through water, and along sandy river beds. 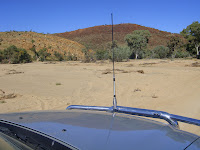 The gorge itself was a bit disappointing, but we did see some 10,000 year old aboriginal petroglyphs, which was quite special. 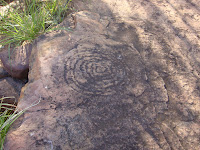 Signage on these walking tracks leave a lot to be desired! You have to look for little blue arrows, and sometimes they are hard to find! We manage ok, as the gorges are at a river, so you just walk up the river bed! The birdlife here is abundant – so many bird calls as we walk along tracks. There are these very pretty little green birds that sit together on the road and leave it to the last minute to fly off – very disconcerting when you hit one!
We left N’Dhala Gorge and went to check out Ross River Resort. These places call themselves resorts, but they are not in the least bit resort like!! (More like a bunch of shacks, or even tents for people to stay in).This resort does not operate now, as we found out from the very grumpy man that was there. He hated tourists, wouldn’t pull you out if you got bogged at N’Dhala Gorge, and his petrol prices was astronomical - $2.30l !!! It was BP too, an oil company very much on the nose these days!
We had 3 lovely nights at Trephina Gorge. We packed up and headed back to Alice Springs to resupply before heading north. On the way we stopped at a heritage listed Ghost Gum – truly magnificent, and Jessie and Emily Gaps and Corroborree Rock. 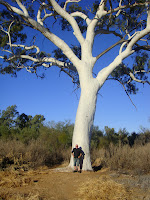 We caught up with a friend of mine, Anna and her husband Max, while we were in Alice Springs. They are living here for a while as Max has got work here. On our last night here, Randall broke a tooth, eating a roast dinner at the tavern near our caravan park. So the $10 roast became a $250 roast!! I am now waiting for him outside the dentist, so hopefully he will come out fully repaired and ready to move on! 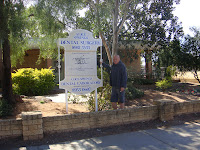 From our Tasmanian trip 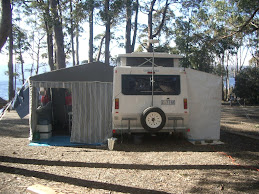 Our setup at Lake St Clair

Deb
Randall and I love travelling, first in our caravan, and more recently in our motorhome We love the outdoors and meeting people on our travels